Head-on conflicts between transcription and replication machineries can lead to replication fork stalling, DNA damage and genomic instability. Accumulating evidence suggests that such "traffic accidents" on replicating DNA are a major cause of chromosomal rearrangements found in cancers. Our team is studying the causes and consequences of transcription-replication conflicts (TRCs) and how cells deal with these genotoxic events to preserve genomic stability.

Causes and consequences of transcription-replication conflicts

TRCs can be induced by activated oncogenes that promote aberrant firing of intragenic replication origins (e.g. Cyclin E) or increase the global transcription activity (e.g. HRasV12) in the cell. Recent studies have shown that head-on TRCs lead to the formation of co-transcriptional R-loops. These RNA:DNA-hybrid-containing structures generated by invasion of the nascent transcript into the DNA duplex behind the elongating transcription complex represent a potent block to replication fork progression. However, whether or not R-loops are the cause of oncogene-induced replication stress and DNA damage remains elusive. Our experiments have shown that replication fork slowing induced by oncogenes such as Cyclin E or HRasV12 can be almost completely rescued by overexpression of RNase H1 (RNH1), a nuclease that eliminates R-loops by cleaving the RNA strand in the RNA:DNA hybrid. Moreover, we observed that over-expression of these oncogenes induced the formation of nuclear foci of a catalytically-inactive form of RNH1 (RNH1D210N-GFP) along with histone H2AX phosphorylation, a marker of replication stress and DNA damage. These findings provide strong evidence that oncogene-induced replication stress is caused by R-loops formed as a consequence of head-on TRCs. We have also found that oncogene-induced replication fork slowing can be rescued by inhibition of PARP activity, which is required for effective fork reversal, suggesting the existence of mechanisms that promote replication fork progression through regions of active transcription. Our current work focuses on mapping the sites of oncogene-induced R-loops on genome wide scale through analysis of chromatin occupancy of RNH1D210N-GFP using ChIP sequencing.
Our work, conducted in collaboration with the laboratory of Prof. Anne Müller, has revealed that R-loop-dependent replication stress can be also detected after activation of ALPK1/TIFA/NFB signaling by exposure of cells to the bacterial carcinogen Helicobacter pylori. This finding provides further support for the hypothesis that TRCs can result as a consequence of changes in the transcriptional program of the cell. 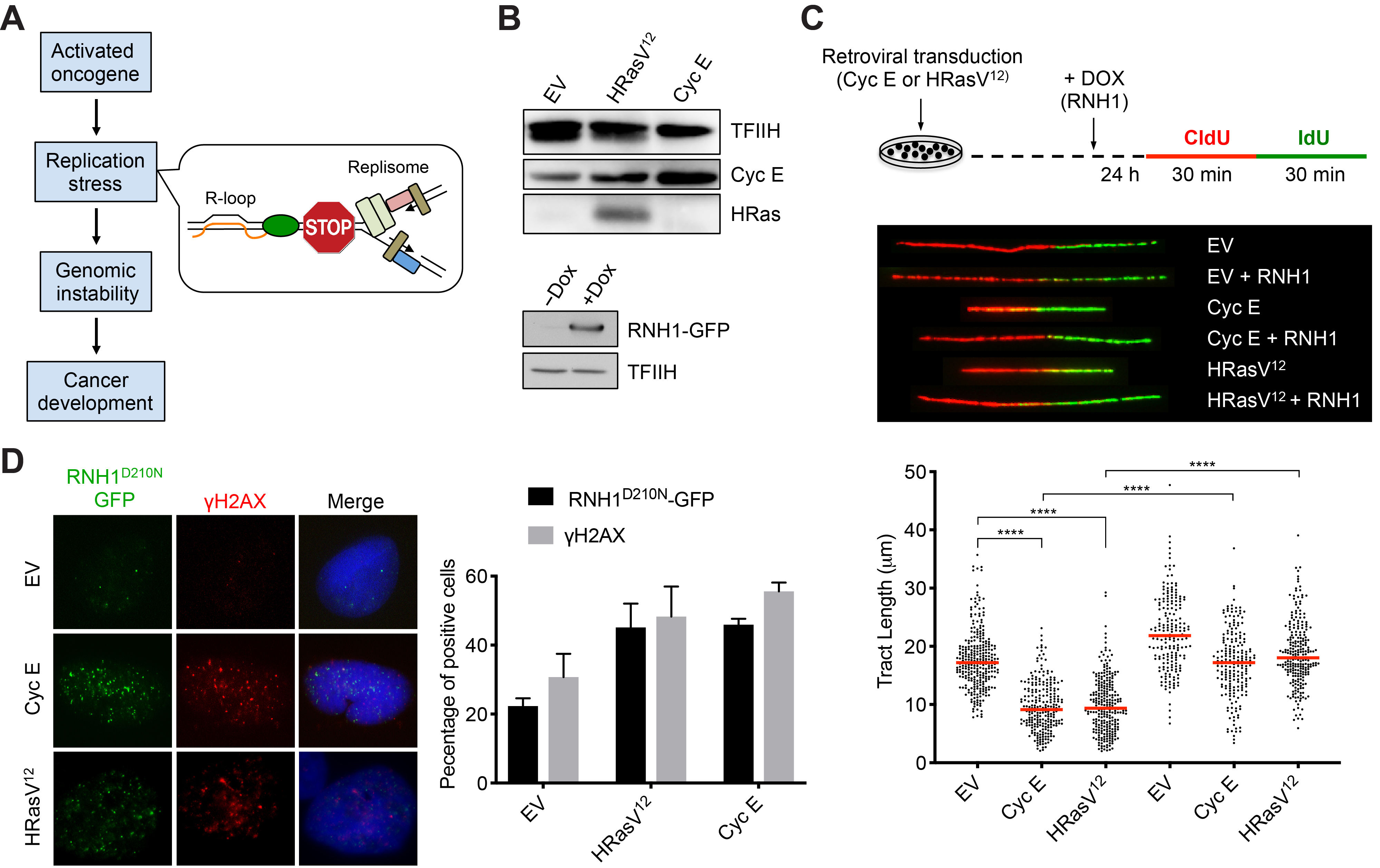 The DNA transactions that occur at sites of TRCs to maintain genomic stability are not well understood. We have studied those transactions upon induction of TRCs by drugs that promote R-loop formation. Our study revealed that replication fork stalling by co-transcriptional R-loops is an active process involving replication fork reversal mediated by RAD51 recombinase and the DNA translocase ZRANB3. Moreover, we have discovered that R-loop-induced replication fork reversal is followed by RECQ1-mediated reverse branch migration leading to the restart of semiconservative DNA replication that requires RECQ5 DNA helicase, MUS81-EME1 endonuclease, SLX4 scaffold protein, RAD52 single-strand annealing factor, DNA ligase IV(LIG4)/XRCC4 heterodimer, the transcription elongation factor ELL and the non-catalytic subunit of DNA polymerase δ, POLD3. Our results suggest a model where RECQ5 removes RAD51 recombinase from the fork junction to prevent a new round of fork reversal and to facilitate fork cleavage by MUS81-EME1 in complex with SLX4. This relieves the torsional stress in the DNA template generated by the TRC and triggers ELL-mediated restart of transcription. After fork religation mediated by RAD52 and LIG4/XRCC4, the reactivated transcription complex bypasses the replication-stalling site, allowing POLD3-dependent replication restart. Interestingly, we have also found that MUS81-deficient cells exhibit hypersensitivity to the PARP inhibitor olaparib, which suppresses fork reversal induced by a TRC favoring replication restart. This suggests that replication fork stabilization by fork reversal and MUS81-mediated replication restart act in a complementary fashion to promote cell survival upon R-loop-mediated TRCs. Our current research focuses on the molecular mechanisms underlying the elimination R-loops and associated G-quadruplex structures at TRC sites, which is required to allow the passage of the reactivated replication fork. 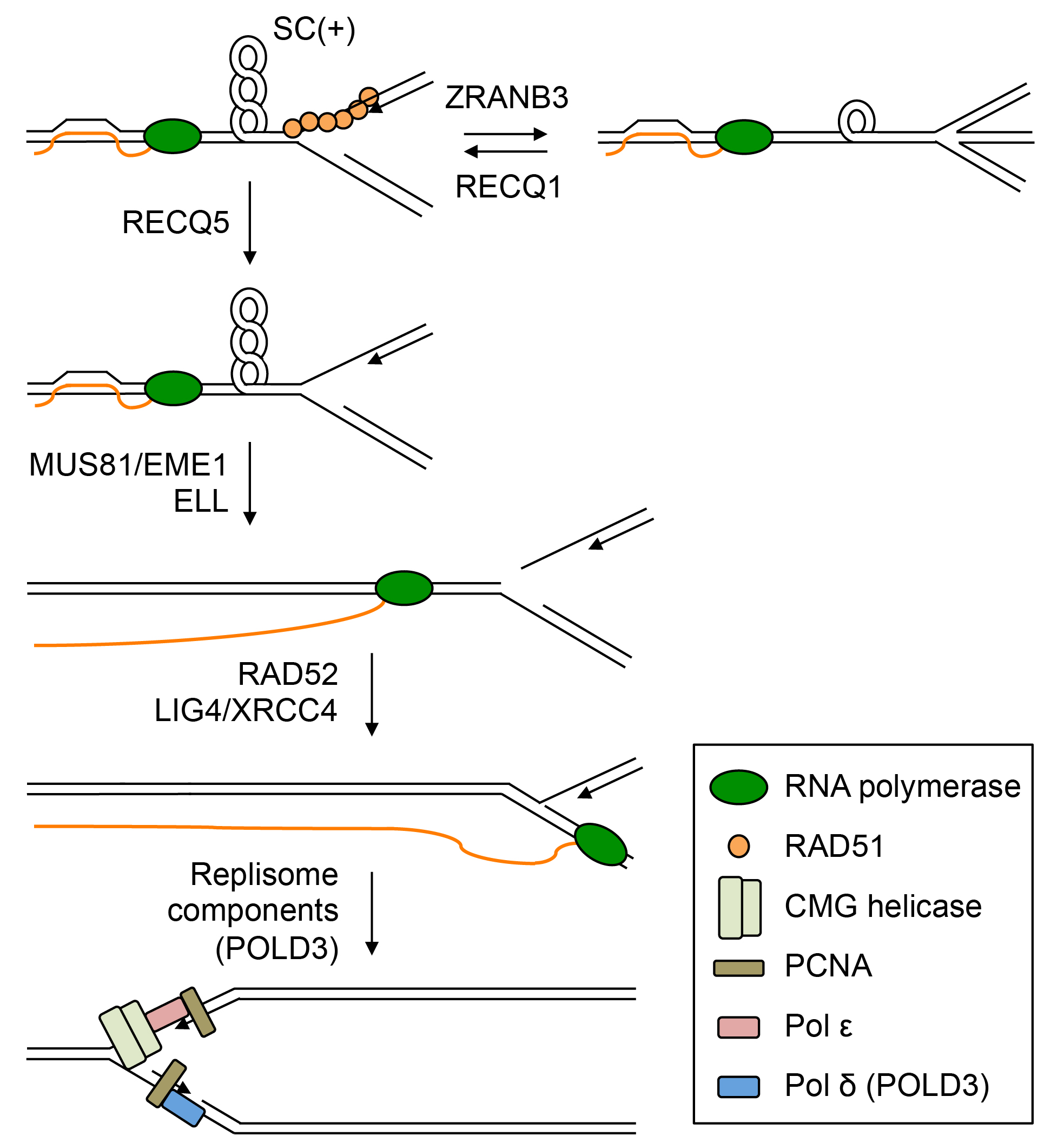 Figure 2. Model for resolution of transcription-replication conflicts. The blockage of replication forks by oncoming transcription complexes results from the build-up of positive supercoiling within the intervening DNA region and the formation of co-transcriptional R-loops. Replication fork stalling leads to the assembly of RAD51 filaments on the parental DNA strands at the fork junction, which promote fork reversal in conjunction with the DNA translocase ZRANB3. RECQ1 DNA helicase counteracts replication fork reversal to promote replication restart. In this pathway, RECQ5 DNA helicase disrupts RAD51 filaments to facilitate fork cleavage by MUS81/EME1 endonuclease. This relieves the topological barrier in the DNA template, allowing ELL-mediated transcription restart. After re-annealing of the parental strands by RAD52 and sealing the nick in the parental duplex by the LIG4/XRCC4 complex, the reactivated transcription complex bypasses the replication-stalling site. This is followed by POLD3-mediated restart of semiconservative DNA replication. It is assumed that after fork stalling, the replicative helicase CMG traverses the fork junction onto dsDNA via its ssDNA gate (not shown). After fork religation, CMG translocates back onto ssDNA to nucleate a functional replisome.